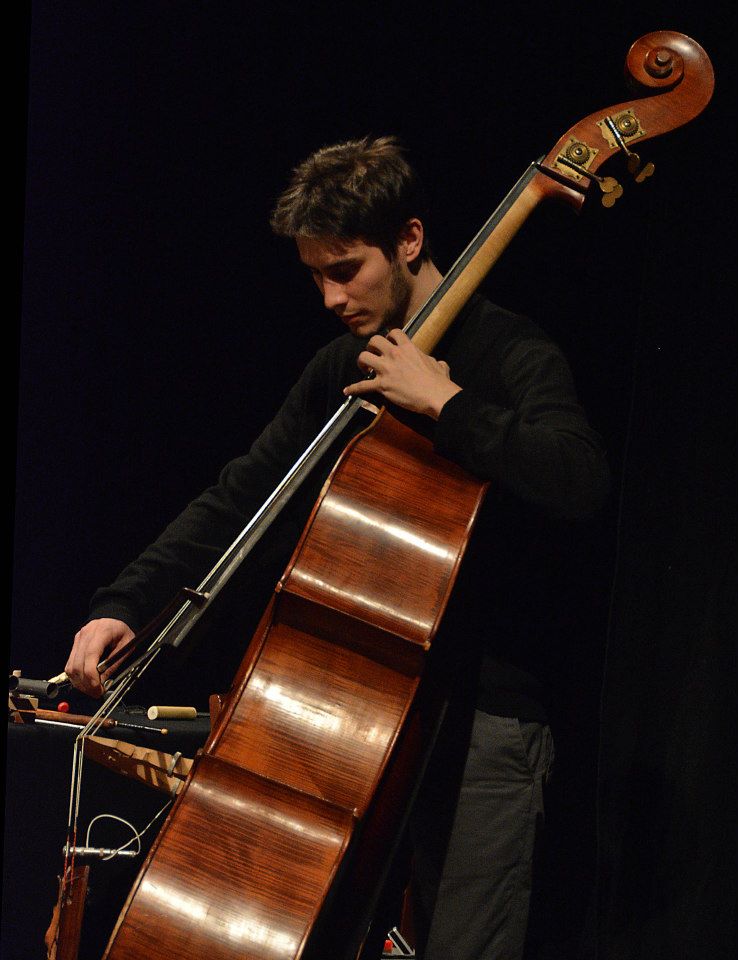 Simone Di Benedetto, 1989, graduated in double bass with highest grade at the Vecchi-Tonelli Conservatory in Modena with Maestro Giannoni, specializing with Maestro F. Petracchi in the Walter Stauffer Academy in Cremona and at the courses of the Chigiana Academy. He also studied composition in the class of M ° A. Giacometti, graduating cum laude and honors, with a work on the relationship between composition and improvisation. Meanwhile, he approached jazz, mastering the study of the instrument with musicians such as Salvatore Maiore, Roberto Bonati, Paolino Dalla Porta, Eddie Gomez, Drew Gress, Dario Deidda, Ben Street, Furio Di Castri, Massimo Moriconi, Glauco Zuppiroli, Ares Tavolazzi. He also graduated in electric bass at the Modena modern music academy with Stefano Cappa.

In 2017 he wins the AIR – artists in residence contest, which allows him to live a six-week artistic residency in Copenhagen.

From 2010 to 2016 he take part continuously at the Permanent Research Laboratories coordinated by Stefano Battaglia at the Siena Jazz Foundation.

In 2011 he recorded with the trio Else! the album First degree, while in 2016 he recorded the album “Il sistema periodico” for the Berlin Aut Records with Alberto Collodel. In 2018 he released with the Archipelagos quartet “In Your Thoughts”, winner of the first “Stefano Cerri” competition and Red & Blue, first record as leader of the S.d.B. project. In 2019 he released his first solo album, Depth Sounding, again for Aut Records.

In 2020 he releases the second album of DST, with Alberto Colloidal on clarinet and Gabriele Mitelli on trumpet and electronics, and the first album of his trio Zarkan, with Marco Colonna on clarinets and Ivan Liuzzo on percussion, both for Aut Records.
In 2019 he releases a series of video called “Workin bass”, about extended technique and prepared double bass.

Since 2014 he has been working steadily with Nicoletta Giberti, actress and director of the Fairy Tale Festival, with whom he carries out a work on storytelling improvisation and on the link between word and music. He also collaborates with Simone Maretti, narrator, writing and performing music for the shows.

From 2017 he teaches composition and ear-training at the Vecchi-Tonelli Conservatory of Modena and Carpi.

As a composer, he has written music for the festival “Grandezze e Meraviglie” and for ERT (Emilia Romagna Theater), as well as having collaborated with various dance companies and with the choreographer Teri Jeanette Weikel. In 2016 he won the first prize and the public prize in the Antico Futuro competition; again in 2016, it ranks second in the Città di Favria Guitar Composition competition.

On the classical side, he plays with various orchestras and ensembles such as Verdi Orchestra of Parma, Altrevoci Ensemble, Orchestra Maria Judina, AdM ensemble. In July 2013 he plays with the Cherubini Orchestra and the Italian Youth Orchestra under the direction of Maestro Riccardo Muti and live on Radio 3 and Rai 1.