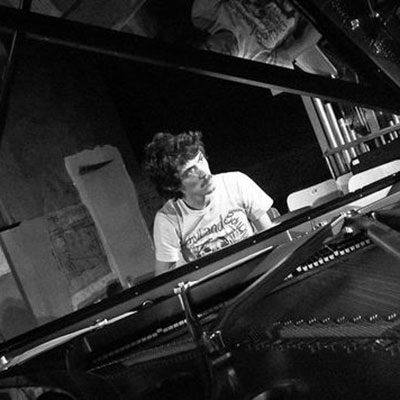 Emanuele Maniscalco (1983) grew up in a family of music amateurs, taking up piano at eight and drums at twelve. At fourteen he started to gain his first recognition after playing some jazz by ear at a friends’ house. He decided then to start studying seriously, devoting much of his time to the jazz tradition, on both instruments.

He is almost completely self-taught. At around eighteen many musicians from his area started calling him for gigs, and soon he was playing as a sideman with some best-known Italian jazz artists, like Stefano Battaglia, Enrico Rava, Emanuele Cisi, Francesco Bearzatti, Gianluca Petrella, Stefano Bollani among others. He recorded around 15 albums as sideman.

In 2006 he started his first band as a leader, called Slow Band, with whom he released his first album in 2010 for the label Re:think-Art Records. Another project of his is a quartet called From Time To Time, which released an album in late 2011. He’s co-leader of a trio called Third Reel, with Roberto Pianca on guitar and Nicolas Masson on reeds (their first album is released on ECM records).