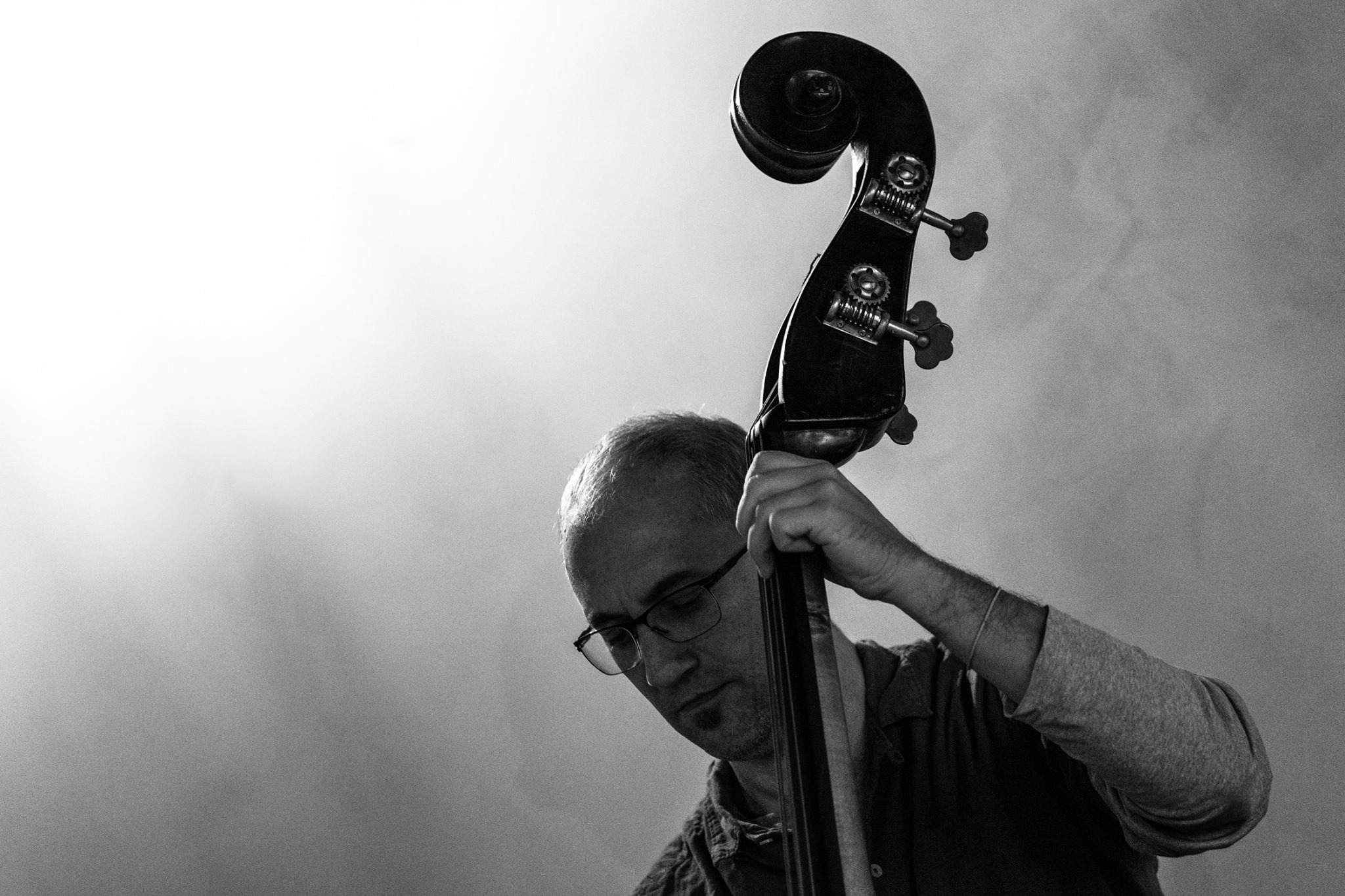 Luca Bernard – doublebass – grew up as a teenage punk-core electric bass player, yet dealing with the practice of improvisation from the very beginning. Mainly self-taught for many years, he soon fell in love with doublebass and switched to it, dedicating himself to the study of jazz technique (with Pietro Leveratto in Siena Jazz, and Paolo Ghetti at the conservatoire) and following remarkable workshops, firstly in that cultural furnace known as “Scuola Popolare di Musica Ivan Illich” in Bologna (the city where, in the meanwhile, he graduated in philosophy and where he currently lives): there he had the opportunity to learn from and play with the likes of Barre Phillips, Tristan Honsinger, Eugenio Sanna, Scott Rosenberg, Thollem McDonas, Taylor Ho Bynum. Further, the human and musical encounter with Anthony Braxton as well as the several times he crossed the paths with William Parker came in those years to feed Luca’s musical practice.
Concerned with the musical scene at large, Luca mainly played with contemporary jazz bands (Noizland, Comanda Barabba) and with the old-school blues band the Jacknives (with harp player M.Pandolfi – and do not mention blues-rock stuff, please!), with whom he had the opportunity to tour professionally over Europe, to play in the USA and to share the stage with some great musician like Lewis “Flip” Barnes, Taylor Ho Bynum, Garrison Fewell, Umberto Petrin, and bluesmen like Paul Oscher, Bob Margolin, David Lee Durham, Alex Schultz.
More and more involved in the educational programs carried out by the aforementioned Illich School and by the Museo Internazionale della Musica of Bologna as well – where he conceives and leads a lot of musical workshops addressed to very different ages, studying with hundreds of children every year the different facets of sound.
Fairly clear, Luca moves where different arts: collaborations include contemporary artist Francesca Grilli [“La Conversazione”, MaMBo_2010 (Bo), “IRON”, DroDeSera_2012 (Tn)] with Francesco Guerri on cello; “Trainpainting”, a performance where action-painting meets an impro-jazz trio (Bernard, Ferlaino & Giovanni Falvo with Paolo Parisi on brushes); “Boduàr”, with multi-reeds player Luca Serrapiglio, in a piéce where the two Lucas are actors, singers, and instantaneous composers around the lyrics of poets such as M.Gualtieri, S.Penna, P.Cavalli, E.Sanguineti; Bassistinti, a double bass trio with S.Senni and A.LaMacchia; “Mamamusica”, an ensemble to perform music for infants and toddlers with their parents, giving sound the power to enrich everyone’s life since the early childhood and restoring the social value of music.