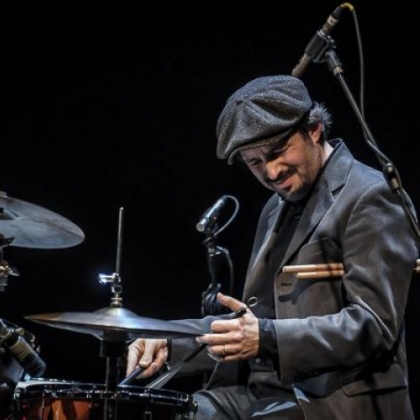 ..the estimable Zeno De Rossi on drums, who moved from subtlest gradations of pulsation to kickass powerhouse tub-thumper in the blink of a millisecond (the snail crawls across the edge of the razor blade) – Gary Lucas NYC.

Able to move between jazz, experimental music and avant-garde pop and rock, drummer and composer Zeno De Rossi (Verona – 1970), is one of the most in-demand musicians in the Italian music scene.

His interest in music and the drums came early through the record collection of his father and older brothers.

In January 2020 he released for Skirl Records “Elpis”, the second album from his trio with Francesco Bigoni and Giorgio Pacorig, featuring Alessandro “Asso” Stefana on one song.

Since 2003 he is working with Italian singer Vinicio Capossela. Through this collaboration he had the opportunity to share the stage with artists coming from the most diverse backgrounds, such as Roy Paci, Matteo Salvatore, Flaco Jimenez, Shane Mac Gowan, Vinicius Cantuaria, Mario Brunello, Calexico, Enzo Del Re, Adamo, Raiz, Paolo Rossi, Ginevra Di Marco, Alfio Anticoa.o.

He currently leads his trio KEPOS (featuring Giorgio Pacorig on fender rhodes and Francesco Bigoni on tenor sax and clarinet), ZENOPHILIA (featuring Piero Bittolo Bon on alto sax and bass flute and Filippo Vignato on trombone) and SHTIK, a flexible lineup which blends jazz and music widely inspired from Jewish culture, whose heritage is one of Zeno’s huge influences.

In 2008 he wrote the music for the ballet PAPER WALL.

In 2010 he toured Europe, Russia and Israel with Mike Patton’s MONDO CANE.

He has been voted as Best Drummer 2011 in the Italian magazine Musica Jazz critics poll. In the same year, he was awarded a prize as Drummer of the Year by InSound magazine.

Since 1998 he spent long periods of time in New York City, playing in some of the most important clubs of the new music scene, like the Tonic and the Stone.