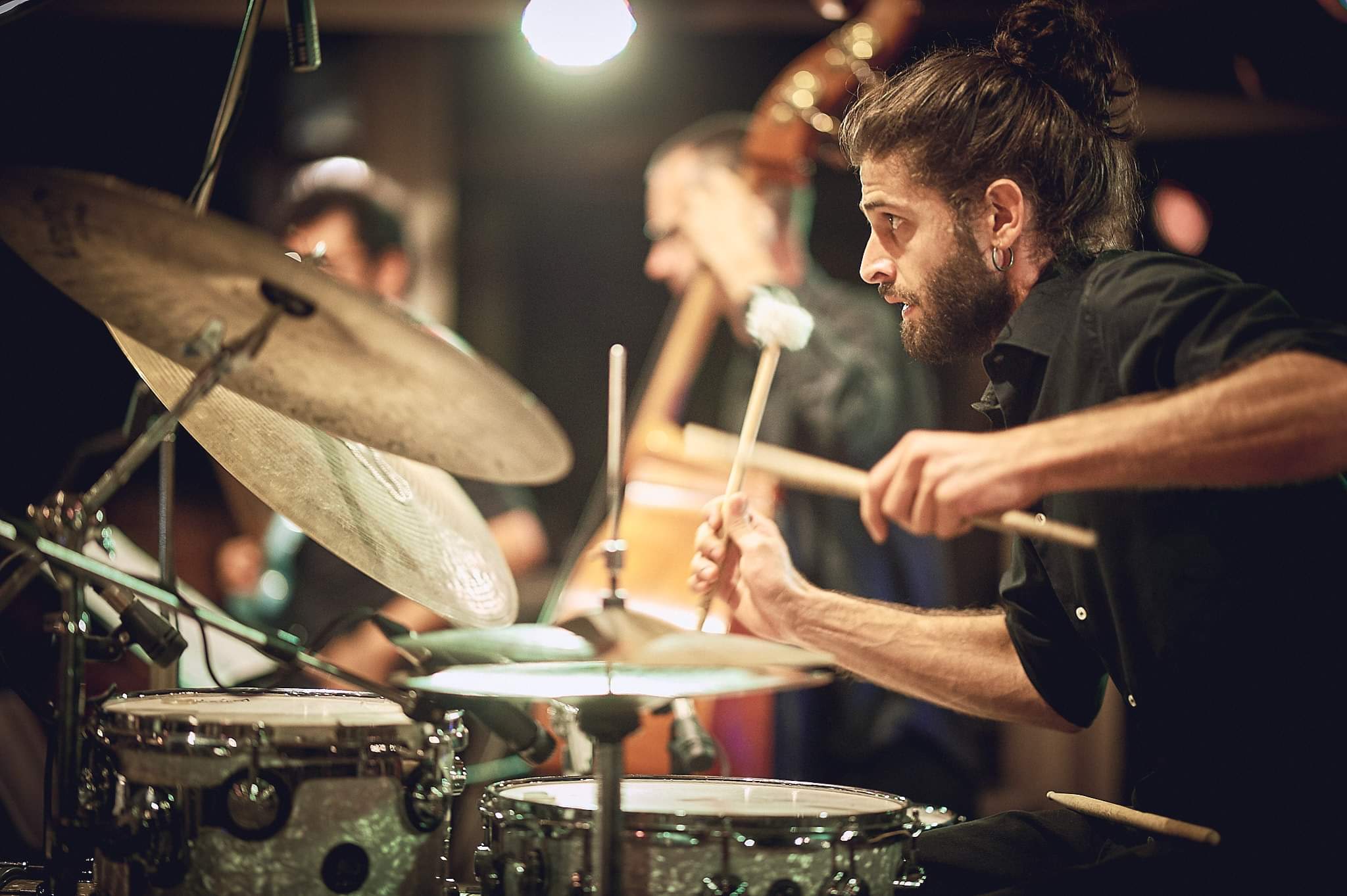 I was born in Rieti on 28 September 1993 and I started playing drums when I was six, thanks to my grandfather and my cousin who are both musicians. My first teacher was a jazz drummer whose name is Gioacchino Fabi. After few years I started playing with my older cousin and his group, which played, among others, some funk and blues. We used to play together the lasts two songs during concerts. At the age of 12, I started playing with my schoolmates and we founded a Pink Floyd tribute band called “Echoes”. During high school I played in many groups, among which “Indian leaf” and “Mattia Caroli & i Fiori del Male”, where we played our original music. After high school I attended the Music Academy “Percentomusica”. There, I met great musicians and teachers like Maurizio Dei Lazzaretti, Jhon B.Arnold, Massimo Morriconi, Pasquale Angelini, Massimo Fedeli, Alessandro Patti, Alessandro Chimienti, Ettore Gentile etc… Than I started attending Siena Jazz University with teachers like Fabrizio Sferra, Alessandro Paternesi, Greg Burk, Alfonso Santimone, Stefano Battaglia, Alessandro Giachero etc… During the bachelor I recorded two discos: one with the composer and contrabbasist Amedeo Verniani “Due”, and one with the composer and guitarist Nicolò Faraglia “Smòs”. Thanks to the project “Artistic Exchange” I played two concerts in Oslo with the group “Typen”, inspired by the book “Psychological Type” by C. G. Jung. The group was lead by the teacher Alessandro Giachero at the piano, the vocalist Andrea Silvia Giordano-vox, Francesco Panconesi-t.sax and Francesco Marchetti-guitar. I also played with the group “Complesso” formed by Cosimo Fiaschi-soprano sax and Giulio Scianatico-double-bass; “Temperamento” with Eugenio Stella-guitar and Cosimo Fiaschi-soprano sax, Pip,Squeak with Luca Sguera-piano and Francesco panconesi-t.sax; “Bitumia storia di Indifferenz(iat)a”, a musical-theatre performance with cosimo fiaschi-soprano sax and the actress valeria fazzi.

During the past years I attended the summer seminaries in Siena with Henry Cole, Roberto Gatto, Harish Raghavan, etc.; the seminary Tabula Rasa at the Chigiana with Stefano Battaglia; a year seminary of musical research with Nicolò Faraglia and Cosimo Fiaschi and the seminary during the festival “Faramusic” with Billy Hart. Now I attend the biennio at Siena jazz University with Ziv Ravitz Tommy Crane Fabrizio Puglisi, Stefano Battaglia ecc.. Since three years I have been organizing with my roommates many concerts and performance in our house called “Certosa” centered on contemporaneity.