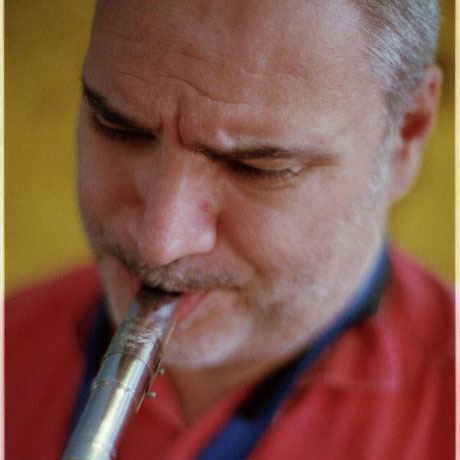 Ivan Pilat was born in Vittorio Veneto in 1964. After studying philosophy in Venice, he joins, in the 80’s, ‘Arti Visive’ group in Vittorio Veneto (collective and personal shows, and performances with sound installations) and in 1982 he founds ‘Laboratoire Neocreative’.

In the meantime he starts studying saxophone under the guide of P. Tomelleri, in Milan. He starts collaborating with different bands and founds his own projects: Le Mad Canaje, Orbitale Trio, Solzenicyn Quartet.

He travels frequently to Germany, where he attend several courses of improvisation, in particular in Stuttgart, Tubingen and Friburg.

During the 90’s he moves to London where he studies with tenorist Alan Skidmore, and collaborates with Lol Coxhill, Stu Butterfield, Marcio Mattos, Tony Bevan, John Rangecroft and Roberto Bellatalla. He founds, in this period, Kongrosian Trio, a wind trio nowadays, which features Alberto Collodel on clarinets and Davide Lorenzon on saxophones.

During the 00’s he moves back to Italy and joins Phophonix Orchestra and founds his own orchestra ‘Improvvirusoundexperience’, based on the model of the London Improvisers Orchestra.

At the moment he’s developing his study in visual arts, with the creation of DeM. P. ZONE; he’s a stable member of Kongrosian and Phophonix Orchestra and also leads a street band.