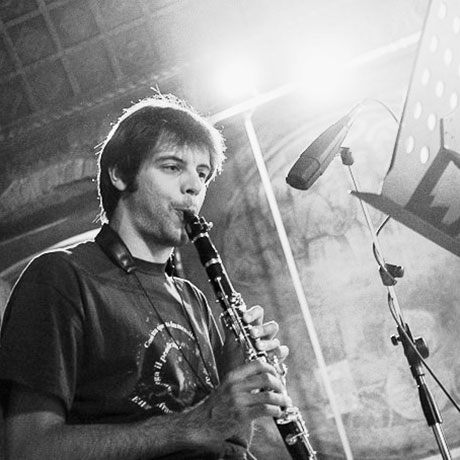 Gabriele Rubino (1985) got a Diploma in Classical Clarinet in 2008 and a Diploma in Jazz Music in 2012 from the Conservatory of Brescia, where he studied with pianist and composer Corrado Guarino. He also studied jazz saxophone with Guido Bombardieri and Giulio Visibelli. He attended summer workshops at Siena Jazz (2008) with Achille Succi, Bruno Tommaso, Stefano Zenni and at Nuoro Jazz (2009) with Tino Tracanna, Tommaso Lama, Luca Bragalini. Currently he attends the Permanent Workshop of Musical Research taught by Stefano Battaglia.

He played as soloist some premieres by the contemporary composer Daniele Ghisi in Bergamo (2007) and at the Akademie der Künste, Berlin (2009). He played with Marco Rottoli Quartet, with Corrado Guarino (in a duo, in a trio with Salvatore Maiore and in an ensemble with Gianluigi Trovesi), with Screwdrive Inn Ensemble (Time in Jazz – Berchidda, 2011) and with the RES Collective of Improvised music.

He plays clarinets and saxophones in various projects with actors, big bands, wind orchestras, jazz, pop and folk musicians in North of Italy.

He teaches clarinet, saxophone and conducts winds ensembles in some local music schools. He’s psychologist and music-therapist according to the Orchestral Music Therapy Esagramma Method: he conducts musical-therapeutic ensembles, from the chamber group to the orchestra, involving people with psychophysical disability and for these groups he also writes arrangements of symphonic classical repertoire. With Esagramma Symphonic Orchestra he co-hold several workshops in Europe (Dortmund, Linz, Pecs, Claye-Souilly) and Washington D.C. (Georgetown University).