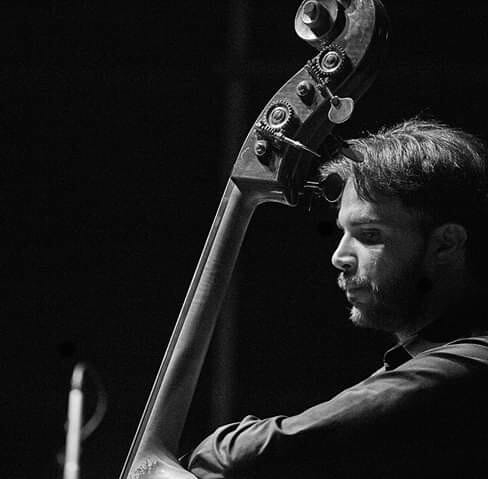 Ferdinando Romano got his doublebass diploma from the Conservatorio L. Cherubini di Firenze studying at the same time with Riccardo Donati and Alberto Bocini. In the same Conservatorio he followed the course of Composition with Paolo Furlani. In 2015 he then got a Master in Performance with Enrico Fagone at the Conservatorio della Svizzera Italiana in Lugano, where he lived for 3 years. At the same time he studied privately with Ares Tavolazzi, Marco Panascia, Joe Martin, Joe Sanders, Furio di Castri. In 2017 he was selected to be part of the InJam Ensemble that selected 10 young italian musicians to take part at the InJam project in Siena Jazz with the trombonist Glenn Ferris and the saxophonist Logan Richardson. He got a reward for the best students during the Siena Jazz summer courses.
His latest project “Totem”, is a septet that features the great trumpeter Ralph Alessi, The album is released for Losen Records. He recently released with Arcadia Trio the albums “Don’t call it Justice” and ”Songs for people”, featuring Robin Eubanks.

He collaborates with many musicians of the Italian and internazional scene and he played in many clubs, festivals and concert halls all over Europe like Lac Lugano, Auditorium Stelio Molo (Lugano), Konzerthaus (Vienna), Musikverein (Vienna), Tonhalle (Zurigo), Basel Casino (Basilea), Auditorium Parco della Musica, Il Torrione (Ferrara), Alessandria Jazz, Tatum Art (Palermo), Padova Jazz, Pisa Jazz, Casa del Jazz and many more.
He was invited to play at the doublebass European Convention Bass 2014 and recently to the 2018 Edition. He played with many classical orchestras (among Italian Youth Orchestra of the Conservatories and the Swiss Jugend Symphony Orchestra). As a composers, some of his orchestral and chamber compositions have been played in festivals. He also worked with theater companies participating to many recordings and productions for Rai (Italian Radio and Television) and Radio Televisione della Svizzera Italiana (soundtracks of film tv, musicals and radio-tv programs).