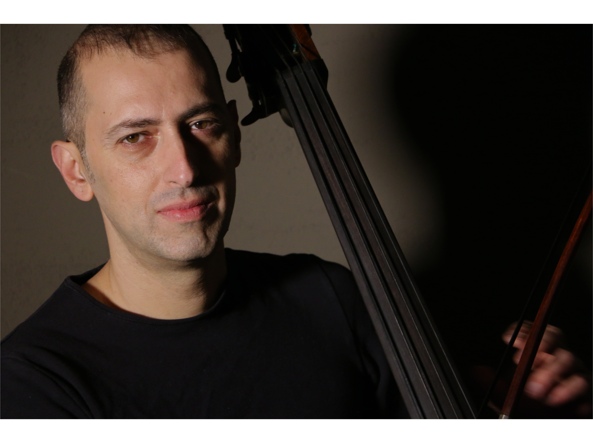 A lover of Heavy Metal and comics (Metal Hurlant, Totem, Eternauta), he started playing the electric bass at the age of 12. Graduated in double bass at the Giuseppe Verdi Conservatory in Turin with Emilo Benzi, he subsequently deepened the solo repertoire with Franco Petracchi at the Accademia Walter Stauffer in Cremona and Jazz Language with Furio Di Castri.

He is a founding member of the Arigret: Turin’s Jazz-Prog ensemble, with whom he played in several Jazz festivals and clubs in France and Germany in the early nineties and recorded the album “Se una notte d’inverno a viaggiatore ..” (1996 cc).

Between 1999 and 2002 he played in the “Misterioso” quartet lead by saxophonist Ernesto Massimo Rossi, with whom he recorded two albums and aboard a Fiat Palio reached Sweden for a series of concerts. In the same period he plays with the Italian Chamber Orchestra of Salvatore Accardo, with whom he conducts a long tour in the U.S.A. also playing at N.Y’s Lincoln Center.

From 1998 to today he plays with Ramon Moro and Dario Bruna in 3QUIETMEN, a math-jazz trio that also makes use of the collaboration of the pianist Stefano Battaglia. Their album “Bartokosmos” (Auand), was very appreciated by critics and brought them in 2008 to perform in the beautiful Concert Hall of the Forbidden City in Beijing.

Since 1999 he has been working as a double bass player with the Symphonic National Italian Orchestra RAI and with the Orchestra of the Teatro Regio di Torino.

In 2001 he began a close collaboration with the Cameroonian musician Tate Nsongan, with whom he recorded the album “Etnokult” (Il Manifesto). The group plays in many Italian festivals in the world, and performs in an original production focused on bass at “Bottesini Basso Festival” of Crema.

From 2002 to 2005 he plays in the show “Omaggio a Josè Saramago” with the singer-songwriter Gianmaria Testa and the actor Giuseppe Cederna.

In 2003 he was awarded by Sue Mingus in the Incroci Sonori Jazz competition in Moncalieri (Turin) and he performed only by opening the concert of the Mingus Orchestra.

In 2004 he was selected by Louis Sclavis for the Europe Jazz Odissey, an orchestra formed by young europeean talents. With Louis Sclavis he deepens the practice of free improvisation.

Also in 2004 he recorded the album “Portraits” with the Loop killer trio (Piero Ponzo on clarinet and Eric Groleau on drums).

He attended the Permanent Music Research Laboratory of Stefano Battaglia in Siena.

From 2005 to today he plays with MAU MAU, historical Italian folk band with whom he records two records and performs in many festivals, including Sziget, Arezzo Wave, May Day Festival Rome and Eurosonic. From 2011 to 2014 he plays with the singer of the Storie Tese ELIO, in the shows Frankestein, Gianburrasca, Futuristi.

He played under the direction of:

He plays in several chamber formations, including the Quintetto Bislacco and the Filarmonici di Busseto.

It is the first double bass of the Turin Philharmonic Orchestra.

In 2015, together with double bass player Stefano Risso, he founded the Solitunes Record, a record label dedicated to “solo” music for which he recorded his first album for “The Inner Bass” solo double bass.

He is a classical double bass teacher at the Parma Music High School.

He has numerous projects in his name, including ATALANTE, with Louis Sclavis, Mattia Barbieri and Enrico Degani, and the duo with Maria Laura Baccarini.

He has recorded more than 50 records.