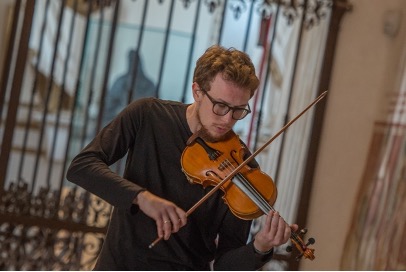 Daniele Richiedei obtains a degree and a master’s degree from the Marenzio Conservatory in Brescia, both with honors, and attended the Hochschule Fur Musik in Detmold for a year with prof. Marco Rizzi.
In the meantime he studied jazz music on his own and in the master classes of Siena Jazz, Nuoro Jazz and of the Center de Musiques Didier Lockwood in Paris.
He won numerous awards, including the Zorzella Award for Best Jazz Talent 2013, the Marenzio Award 2011, the Enrica Cremonesi Award in 2009, scholarships for merit at the summer seminars of Siena jazz 2009 and those of Nuoro Jazz 2010; audience prize at the Chicco Bettinardi 2010 National Competition for new Italian jazz talents, a competition in which he ranks among the finalists as well as receiving flattering reviews from the specialized press.
In the classical field, he performs as a soloist with orchestra in important contexts, such as the Teatro Grande in Brescia (Mozart) and the international violin festival Gasparo da Salò (Concerto op. 12 by Kurt Weill).
The composer Paolo Ugoletti has dedicated to him the Concerto for Electric Violin and String Orchestra (2010) which sees him in the role of soloist and improviser.