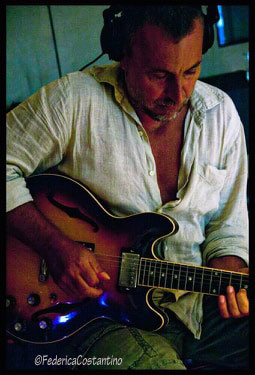 One of the most interesting guitarists on the contemporary scene, with a very personal style, a synthesis resulting from a heterogeneous formation developed over the years, by attending a variety of contexts and guitar music from rock to jazz to ethnic music, from ‘electronic to classical guitar, european classical forms to contemporary improvisation.
Pioneer and important point of reference in the use of electronic effects applied to the electric guitar, is both a great expert on the classical guitar, which is one of the most original interpreters.
During his career, he has released numerous recordings as a soloist and as a guest, actually for “Parco della Musica Records” and has collaborated with leading representatives of international music (Kenny Wheeler, Tony Scott, Steve Grossman, Andy Sheppard, Bob Brookmeyer, Maria Shneider, Daniel Humair, Ernst Reijsenger, Dominique Piffarelly, Antonello Salis, Paolo Fresu, Paolo Damiani, Fabrizio Bosso, Gianluigi Trovesi, Don Moje, John Taylor , and many others…), performing in the most important theaters and international festivals.
Is leader of various projects, from the solo to the quintet, in which he expresses his music.
Is full professor of “Jazz Guitar” and “Theory, Analysis and Improvisation” at the Conservatory S. Cecilia in Rome from 2007, and at Conservatory A. Casella, L’Aquila, Conservatory O.Respighi, Latina, and actually Conservatory L.Cherubini, Florence.