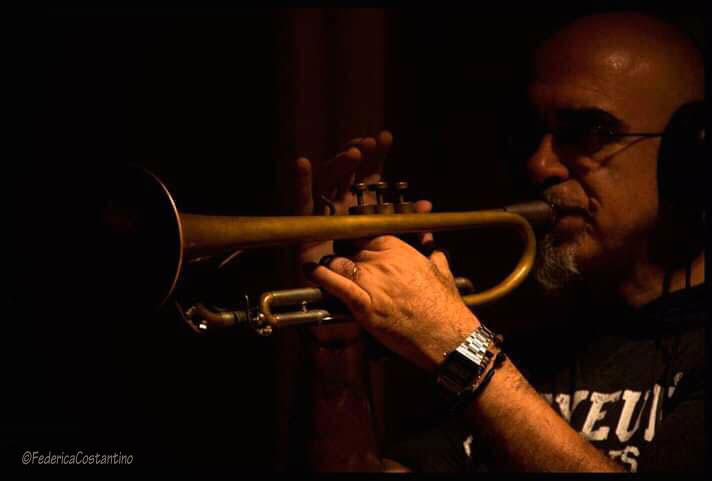 “Angelo Olivieri (Pitigliano, 1968, trumpet, flugelhorn, pocket-trumpet, composition, arrangement) is a trumpeter technically gifted, creative, curious, ready to embark on any project that involves something new, unusual, stimulating its lust for research and artistic growth. […] During his career he has put together different groups, always working in the field of experimental music … “.
(Flavio Caprera Italian Jazz Dictionary – 2014 – Feltrinelli)

Musician appreciated by audiences and critics, since the first edition of the referendum Jazzit Awards , he stably figures among the 10 best Italian trumpeters. Moreover, he had numerous mentions in the TOP jazz both as an instrumentalist and for his records.
In 2004 he recorded the CD Oidé with the Oidé ensemble. With the same label he published Nadir with the pianist Alessandro De Angelis (2006) and Echoes with Pasquale Innarella, Armando Battiston, William Parker and Hamid Drake (2007). In 2009, his CD CAOS Musique has obtained a whole critics’ consensus, been defined “a wonderful example of contemporary imagination and sensibility” (Aldo Gianolio – Musica Jazz). In 2009 he also recorded as co-leader with the quintet Harafè, whose CD was presented at the JAZZ.PT festival.
In 2012 he publish three works: IF NOT – tribute to Mario Schiano, CAOS Musique – live @ casa del jazz and DIALOGO with the double bass player Silvia Bolognesi.
IF NOT , of the Olivieri – C Neto double trio has been indicated as one of the Best Releases by the NEW YORK CITY JAZZ RECORD.
In 2015 he recorder with his ZY project the CD Nowhere’s Anthem (JAZZIT Records).
With ZY project he realized the soundtrack of the docu-ficion “Qualcosa di noi” by Wilma Labate.
Since 2013 to 2015 he has been the director of the world music ensemble Med Free Orkestra.