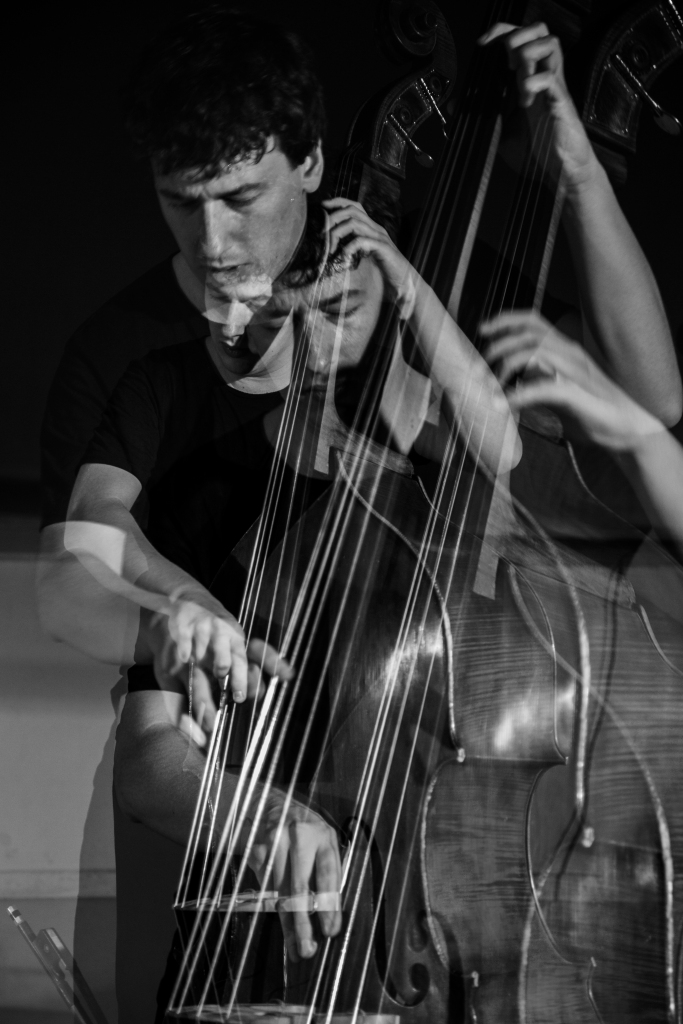 He is mainly active in avant-jazz, post-bop and improvised music. He is also often involved in jazz, classical and contemporary music, and sometimes even in pop music (in which he has worked as session man recording “Consequenza Logica”, an album by Matia Bazar and alive with the Sanremo Orchestra). He also recorded the Italian TV jingle for Paramount Pictures Channel.

He is currently leader of Blend 3 trio (with alto sax player Manuel Caliumi and guitarist Michele Bonifati) and leader of the Blend Orchestra (a 12 elements ensemble).

The union between Blend 3 and the amazing voice of Gaia Mattiuzzi has given life to Songs and Poems, project about the sound of words, an exploration of the “voices” of some great Poets.

He also collaborates with several groups in jazz and improvised music (ParmaFrontiere Orchestra and Chironomic Ensemble by Roberto Bonati, Pipeline by Giancarlo “Nino” Locatelli, in trio with Michel Doneda and Filippo Monico, Milano Music Collective, Nexus by Daniele Cavallanti & Tiziano Tononi, Idea Trio by Gaetano Liguori; Takla Jazz Trio by Filippo Monico, Extemporary Vision Ensemble by Francesco Chiapperini, Beatrice Arrigoni 4et, the band I am a Fish) and in classical and contemporary music ensembles (in the GMC by Danilo Grassi, in the MG_INC Orchestra, in the Ensemble ’05 by Massimo Felici and Antonia Valente and as a chamber duo with the pianist Gledis Gjuzi).

In the performative arts he collaborates with the contemporary dancer and choreographer Laura Matano and her XL Collective; with SParsi, a sound painting group of musicians and dancers conducted by Giancarlo “Nino” Locatelli; in audio/video performances, with the very important photographer and video maker Roberto Masotti and his Tai NoOrchestra.

He has been invited to several tv shows: “Gazebo” on Rai3 National television as part of the Italian trio of Aruan Ortiz; “Fantastico” on Zelig TV.
He also works with the tv conductor Giampaolo Gambi in his theatre performances.

In 2016 the “Beatrice Arrigoni Quartet” is given the MIDJ Prize as Best Jazz Band Under 30 of Lombardia and Emilia Romagna.

In 2017 he played at Patti Smith’s laurea honoris causa celebration hosted by the Parma University.

In 2018 the Compagnia Danzability is part of the International Contest for Coreography held by Festival Escena Mobile in Siviglia with the performance “Exit” by Laura Matano with live music by Andrea Grossi.

Special Mention at the International Prize “Giorgio Gaslini” in 2019.