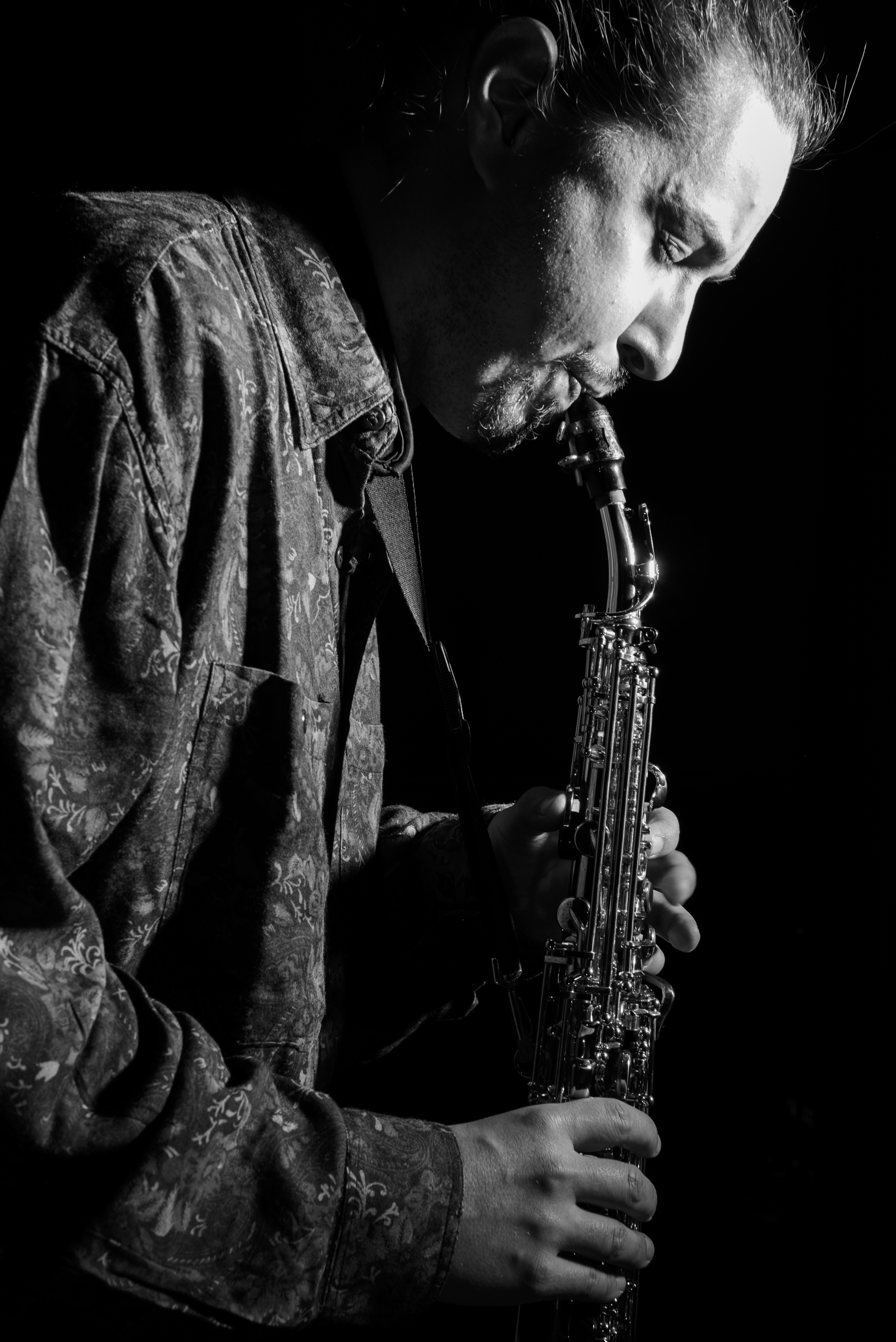 Tobia Bondesan is a saxophonist, composer, arranger and conductor.

He starts playing alto sax at the age of 12, taking lessons with a teacher who notices his ease in the approach to wind instruments. After a brief private study experience, he found himself immersed in the jazz world from the very first years of his studies and from there he began to move in small steps in improvised music and research.

He is academically formed in the school Siena Jazz: he completed the five-year preuniversity period with a thesis on open forms. At the age of 23, he began studying the three-year academic course that concludes with honors (as the first ever graduate of the prestigious institution), with a thesis on improviser collectives, tutored by some of the best musicians and teachers on the Italian scene. In this educational path he has the opportunity to study with Achille Succi, Stefano Franceschini and Pietro Tonolo as instructors and to meet, on his academic years, important figures such as Stefano Battaglia, Maurizio Giammarco, Marco Tamburini, Giovanni Falzone, Ferruccio Spinetti, Silvia Bolognesi, Simone Graziano, Paolo Birro, Stefano Onorati, Tony Cattano, Roberto Rossi, Roberto Spadoni, Alessandro Giachero and many others. He also has the opportunity to take part to workshops held by leading international jazz personalities such as Tim Berne, Steve Lehman, Michael Blake, John Taylor, Rouben Rogers and others.

During the three years of Siena Jazz University, he is chosen for different commitments of representation of the school: it plays, for example, with Alessandro Giachero at the jazzit fest (2014-15), in the Calici di Stelle (SI), Radicondoli Festival, Festival delle rocce, Sette note in sette notti, Opening of the Summer seminars of Siena Jazz and as the only musician selected to represent Siena Jazz in Milan Expo.

He attends several seminars and workshops, in Siena (he attends the Siena Jazz Seminars of jazz music 2008, 2011, 2013, and the Open Combo stages by Silvia Bolognesi) and in other cities. He attends annual courses with improvisers and professionals of the various branches of contemporary music such as Stefano Bartolini (sax) and Alessio Riccio (drums).

During his years of study he moves at ease between the jazz formations of which he is a part and the avant-garde ensembles: he forms in 2011, just over twenty, the Uroboro Open Collective, an octet of musicians from many Tuscan cities, centered on Conduction, he works with the Fabbrica 5 project, composing and arranging up to the podium of the competition that will lead him to play on the main stage of Umbria Jazz in the summer 2014 and in the same event in 2015. With the same group he played at the “Novametis” festival in Modena, at the Torrione Jazz Club Ferrara and has recorded an album (Fabbrica5) published for ASimpleLunch in 2016. He often works in duo: with his brother Michele (double bass) in the duo Brotherhood (Hat and beard, Fara Jazz Festival 2016 , another lap around the sun minitour 2017) and in a duo of sax and live electronics with Cristiano Bocci, with whom he recorded two albums: “Instruments” and “Old postcards” (respectively with Acustronica and DOF labels). In the meantime he is responsible for the orchestras of the collective BlueRing Improvisers, the BlueRing Orchestra (Siena) and the Bologna laboratory orchestra. He plays in the Big Band of the Martini conservatory (Bologna Jazz Festival 201516) and in the Tower Jazz Composers Orchestra, stable formation of the Torrione Jazz Club of Ferrara directed by Alfonso Santimone and Piero Bittolo Bon (who plays, for example, at Correggio Jazz 2017 and at the Bologna Jazz Festival 2017, Bologna Jazz Festival 2018 with David Murray). He plays and records with Giancarlo Schiaffini, Silvia Bolognesi, Walter Prati and Giuseppe Sardina in the project by Mauro Rolfini “Cercando il Caso”. He is among the students of the G.B.Martini conservatory chosen in 2015, 2016, 2017 to play the music of Tim Berne, Steve Coleman and Steve Lehman at the exhibitions inside the Bologna Jazz Festival. He plays with the Segnosonico project by Pasquale Mirra and Stefano Ricci at the Bologna Jazz Festival 2017 and on several other occasions (Bilbolbul, Academy open day) and record a vinyl with this project in the name of Pasquale Mirra. It is selected by the same conservatory as one of the two students participating in the Birmingham Monkhatlon (2017). He composes original music and plays in various formations in the area of Bologna, including the new project in his name Tobia Bondesan-Basement, with which he receives a special mention for the MIDJ aquedotte competition, playing in Cremona at Palazzo Trecchi, and with whom he arrives finalist at Fara jazz 2017. With the same group records a disc in the next release.

It is suitable for the competition for the orchestra of young talents of Italian jazz promoted by the Milan Conservatory.

During the years of the formation, he is a frequent visitor of the scene of tuscan improvisation (collectives such as ImproZero, Cobralibre) and a student of some of the leading names in improvised contemporary music. Thus he has the opportunity to come into contact with musicians who will influence him artistically and professionally, by forging with some of them human relationships that will often lead to fruitful collaborations.

Passionate about improvisation and directing techniques he is founder and coordinator of BlueRing-Improvisers (as well as president of the cultural association of the same name): the collective is based on a circuit of musicians from all over Italy, with a catchment area of several tens of instrumentalists. The association promotes research activities, educational activities, retraining, artistic residencies, interdisciplinarity, recording activities, reviews and events. With a few hundred musicians passed on the stages of BlueRing and with almost 50 free improvisation meetings, the association represents a point of reference in the panorama of collectives of the center-north of Italy, among the most long-lived and active of the new generation: it is recent the publication of an album in the name of the collective orchestra directed by him (BlueRing, VOL.I, Rudi records). He directs the BlueRing-Improvisers Orchestral Laboratory, he is director of the BlueRing Orchestra and other numerous extended formations. He is active in the role of assistant in the Fonterossa Orchestra of Silvia Bolognesi: during the Fonterossa Orchestra Workshop 2017 and 2018, as assistant, director and teacher in the permanent orchestra.

He is also involved in writing and interaction between the arts: he wrote the book “Il rumore dell’intuito (e altri colori incerti)” published by Edizioni Progetto Cultura, he wrote many newspaper articles, mostly dealing with music and culture on Metis, the Cittadino Online, Il Manifesto.

Indivually, and/or with the collective, has personally built a deep link between music and visual arts and performative: he has designed and realized several performace of musicians and actors, dancers, sculptors, graphic artists, painters, performers, among which the “duo for saxophone and slab of zinc” stands out with the good graphics (and his partner) Marta Viviani.

At the educational level since 2011 he teaches privately saxophone, composition and arrangement, theory and harmony. He teaches at Siena Jazz between 2012 and 2014 at the Peter Pan Project children’s workshop. Collaborate with the art museum for children of Siena. Between 2012 and 2016 teacher during the Siena Jazz concert/ lessons. He teaches between 2015 and 2016 at the Jazz Band Rosia school. He teaches in the “realsound” music school in Bologna. He is trainer of BlueRing Improvisers laboratories of dozens of musicians on the practice of gestural management. He teaches in the Orchestra Laboratory BlueRing meets Fonterossa, collaborating with Daniela Veronesi.

In 2017 he realizes the idea of an artistic residence focused on improvised music with his brother Michele and the collegue Giuseppe Sardina, which proves to be a source of great inspiration for coordinators and patrons. The experience was repeated, in an extended form, in 2018 with an attendance of 40 musicians and 5 visual artists for a total of 5 days of concerts, conferences, recordings, seminars, performances.